skip to main | skip to sidebar

A snapshot from Silverlake

When Obama won 4 years ago, we started a spontaneous victory party on the corner of Sunset & Hyperion (relive the beautiful madness HERE and HERE).

Last night, we were all a little more subdued -- we'd been so anxious all day that we were just so RELIEVED that we could finally breathe again. We started saying our goodnights. But then I was like: wait, hold on. We can't just GO HOME. We have four more years of Obama, the first president to ever acknowledge gay people! Four states made huge progress in the marriage equality fight! An out lesbian won a seat in the Senate! These things are huge and we should REALLY CELEBRATE, like we did four years ago.
So we headed out to the corner of Sunset & Hyperion again. We shouted at cars with joy and the cars honked back. Neighbors came out to join us, some of the same people we celebrated with four years ago. We danced and laughed and screamed until our throats were sore. We made jokes about how screaming and dancing on street corners is really good cardio. (IT'S TRUE, TRY IT.) And then suddenly, somewhere in the distance a man started playing the Star Spangled Banner on his trumpet. It felt unreal, like a mass hallucination, we couldn't even figure out where the music was coming from. Finally we found the trumpeter standing in a second story window down the block. We sang along to our national anthem and we soaked in some victory. 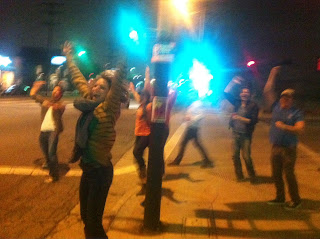 Is this thing still on? Anyone still out there?
For those who were following updates on my friend Uma back when I used to post on this blog --(links in the sidebar) -- I'm going to be posting a new update either today or tomorrow. She has been going through some more health issues and we're trying to raise some more money to help her. But I'm not even sure if anyone will see anything here anymore....leave a comment if you're out there, my lovely former blog readers.
Posted by Erik at 10:52 AM No comments:

It's been awhile since I've sent out an Uma update. She's doing well, but she's had a rough few weeks, and I thought it would be nice to counteract that roughness with some love and help flowing her way, so I'm raising money to cover some therapy bills. For those of you who don’t know Uma & John’s story, here’s a brief timeline to fill you in on some significant moments:

January 31st, 2007: while she was in New York visiting her fiancé John, a musician who was in NYC on tour, Uma suffered a ruptured brain aneurysm. She was only 27-years-old. Uma was in a coma for several weeks, during which time she had a stroke. Her doctors told us she would probably die (they gave her a “20 percent chance of living” on two separate occasions). But Uma’s a fighter. She woke up from the coma with aphasia (she was unable to speak, read, or write) and with restricted movement on the right side of her body.

March 12, 2007: Thanks to the incredible generosity of friends and family and strangers, we were able to rent an air ambulance to fly Uma out to an in-patient therapy center in California, where she started learning how to walk and talk again, with the help of John, who’s always been by her side.

July 14, 2008: Uma and John got married! It was a beautiful ceremony. A day we’d all been looking forward to with so much hope.

2009: Uma continues to fight to regain her speech and movement on the right side of her body. She does several hours of speech and physical therapy every day. It’s basically her full-time job. She recently applied to be a volunteer at Cedars Sinai, where she will work with other aphasia patients to help them in their recovery.

October 16, 2009: Uma was taken to the emergency room with an incredibly painful headache. There was a lot of fear that she might have been suffering from a re-bleed of her aneurysm, but after undergoing dozens of tests (MRI, catscans, angiogram, spinal tap, etc), her doctors have ruled out all of the scary stuff and it looks like it’s “just” a migraine. As great a relief as that is, she’s still been in the hospital for two weeks now, in a state of constant pain. John has been at her side the whole time. After almost three years of speech therapy, Uma continues to improve. Studies have shown that aphasia patients plateau when they run out of motivation and/or money for therapy. The motivation thing isn’t a problem for Uma. Like I said before, she’s a fighter. But they could always use more money for therapy, and after these last two stressful weeks in the hospital, it would be so nice to ease some of their financial stress. John and Uma aren’t the type of people to ask for help, but when Silvie suggested setting up a website to collect donations for them, I thought it would be nice to ask for them. All of their friends and family have already been so generous in the past, and everyone’s struggling financially right now, so please don’t feel any obligation if it’s not a good time. But even the smallest donations add up quickly, and you would be providing them with such great relief. Thank you!

(TO READ PREVIOUS UMA UPDATES, CLICK ON THE "UMA" BUTTON SOMEWHERE ON RIGHT SIDE OF THIS PAGE.)
Posted by Erik at 9:41 AM 37 comments:

I realize I haven't blogged in seven thousand years and I don't even check my statcounter anymore (because I haven't been blogging, so why bother) so I have no idea if anyone ever still comes by these here parts, but I figured I should officially announce that the My Year of New Things blog is dead. I'm not going to post anything new here. It was a fun ride, and it's way over. At least in this incarnation. I might start up a new blog, but if I do, I need to find a new hook. My literal "year" of new things ended nine months ago. This is a dead horse. I'm gonna stop kicking it.

In other news, do what you can to support the WGA. If you're not in the WGA but still sympathetic to our cause (especially if you're in SAG, because we're fighting for you too), come on out to the picket line and march with us! It's kind of exhausting, really, but it can be invigorating too--to feel like you're a part of something bigger than yourself--and the more people who are there, the more it feels like we're making an impact. (And no one wants this strike to last long, so the more impact we make up front, the better the chances of this thing ending sooner.) I'll be posting photos from the line on my flickr account, here:

Also, I'm posting an email below from my friend Sian Heder. You should seriously check out her film. It's a wonderful piece of work and I'm proud to be good friends with someone so talented. Support short films on itunes! Okay, I'll let Sian speak for herself:

"Just a note to let you know that my short film, MOTHER, is now available for download on iTunes! It's only two bucks...actually $1.99...which is a pretty damn good deal. What else can you buy for 2 bucks? A sponge. Some paper towels. Two packs of gum. Maybe an 8 oz Tecate in a dive bar? (Not including tip.)

"If you haven't seen it, now is your chance! If you have, watch it again! Short films are fairly new to iTunes, so the more support we have, the greater the likelihood of iTunes supporting filmmakers in the future. Dooo it...dooo it...Here is the link:

"Enjoy! And please pass this along to anyone else you think might enjoy the film! Our festival run is coming to a close and it would be great if this little movie could continue to have a life online...

"Thanks and my love to you all,
Sian"

That's all.
Over and out.
It's been real.
And in the immortal words of Angela Chase:
We had a time.

Obviously I haven't posted in, like, 500 years. I've been thinking lately that the blog break might be for good. Or sometimes I think that I need to dump "my year of new things" and start fresh with a new blog. I dunno. I've been super busy, which is great, but the blog suffers. Anyway. That's not why I'm posting. I'm posting to send you AWAY from my blog, to my friend Andrea Stern's blog. Andrea was recently diagonosed with AVM (it's the brain thing that Nate had on Six Feet Under) (what the fuck is up with brains lately?) and if you're reading this, please take a moment to send her some good thoughts, good vibes, love, all of that jazz. If I've learned anything from the last year, it's that positivity and prayers fucking work like a mofo. Andrea's doing really well, and she's scheduled for surgery soon, which is obviously scary, but it needs to be done. So if you've come here to read my blog again and you're like, dammit, Erik hasn't posted anything new, then go over to Andrea's blog instead, because I'm sure Andrea (and her close friends who are helping with the blog) will be updating regularly, and you'll find stuff to read there.

So I got a cat yesterday and I named her Catherine. I didn't even realize that the word "cat" was in her name until after I named her--she got her name because when I first saw her at the rescue shelter, she was sitting on a newspaper advertisement for the movie "No Reservations" starring Catherine Zeta-Jones. I realize it's phenomenally gay to name your cat after Catherine Zeta-Jones, which is another reason why I enjoy the name. Also, I'm not particularly a fan of Catherine Zeta-Jones (I'm not NOT a fan, I'm more indifferent), and I think it's kind of funny to name a cat after an actress that I have absolutely no attachment to whatsoever. I assumed that I'd be calling Catherine "Cat" for short, but then yesterday I discovered myself calling her "Cathy," which I enjoy as a cat name more than all of the other above-mentioned names combined. So I'd like to introduce you to Cathy. 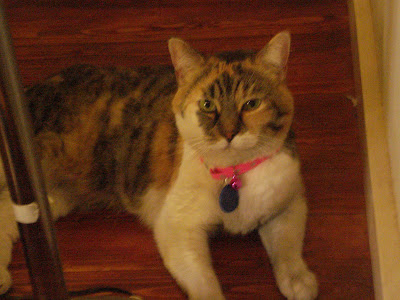 In non-cat news, Eleanor got me hooked on the amazing dating reality program Rock With Love. If you’re watching (and if you aren’t, what’s wrong with you?), I’m rooting for Heather to win Bret’s heart. (Though it would be pretty fantastic reality television to watch her go home after having tattoo’d Bret’s name to her neck.) Jess is actually my favorite girl, but I think she’s too good for Bret and so I want her to get second place and then go on to bigger and better things.

In other non-cat news, my friend Andrea hosts an essay-reading night in Miami, and she just posted a video of her latest essay on youtube, and it’s pretty brilliant. I love Andrea, you should too. Check her out:

Matt & His Feats of Strength

My brother Matt is totally going to be the next YouTube sensation with his series of videos in which he performs moderately difficult feats of strength. I once sat next to LonelyGirl15 at a thai restaurant, so I have my finger on the pulse of these kinds of things.

Click Here to Donate/Help Out With Uma's Medical Expenses 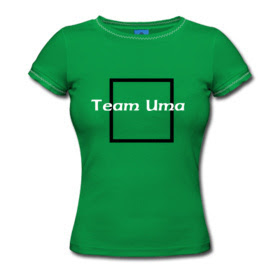 Erik
If you want to read "about me," go HERE, and to find out more about my plays, go HERE.)